We have a one-year-old miniature wired-hair dachshund named Pippin. Her personality is larger than life. But behind all eleven pounds of cuteness is a tiny toy terror. In the last year, we have been through countless toys, toys meant for puppies, toys for big dogs, toys intended for chewing dogs, toys that were supposedly indestructible (liars!). Below is a list of our very best and very worst toys.

1. Do not buy the Peanuts Christmas Toy dog set.
Pippin received this set as a present from Santa and before you could say “Kris Kringle,” Woodstock was scalped, and Snoopy lost a leg and his nose. Charlie Brown was instantly decapitated, destuffed and is now MIA. These toys lasted literally less than 24 hours.  Santa’s elves need to step up their game, Walmart is no place to shop for dog toys! 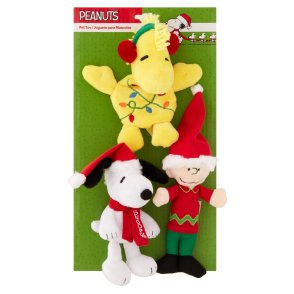 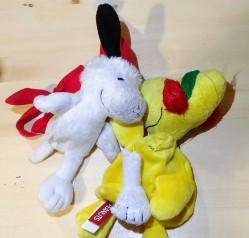 2. Do not buy the Uber Tuff Moose.
So much for being “Uber” tough. Pippin found a loose thread on the back and essentially “unzipped” the moose’s back seam, relieving it of its squeaker and stuffing. The wound is much bigger than the picture shows. My wallet feels so violated when dog toys last less than… a minute! (It actually lasted about five days.) 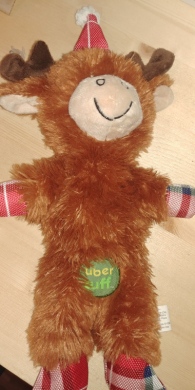 3. Do not buy the small Kong for puppies.
By the end of the purchase day, Pippin made fast work of her pink Kong. We didn’t realize she was behind the chair pulverizing her Kong. And yes she ate all of those little bits of pink rubber. We know because we saw them come out the other end. Kong makes these, especially for puppies! What are they thinking?

4. The Adog Dog Rope Toy gets a thumbs up.
This 9 inch durable, cotton rope dog toy has lasted for months. We call it a “flossy” bone because it reminds us of dental floss on the ends.  Pippin loves to play tug-of-war and fetch with it.  It cleans and strengthens Pippin’s teeth and mouth.  Whenever it becomes to grubby we throw it in the washing machine. We’ve certainly gotten our money out of it. It’s still going strong 11 months later.

5. Pippin loves the Wild Plush Fox by Leaps and Bounds.
While this toy is not stuffed, the red and white flat toy fox has a squeaker in its head and a crinkly material in the long flat wide tail. Like any small kid, she likes toys that make noise. Pippin’s looks a little rough but it isn’t missing any parts, and she loves to take it to bed. We have to be careful when she is shaking it, however. She has learned to snap that thing like a wet towel! If a fox isn’t your animal, they also have a beaver, rabbit, and racoon. We brought our fox home the same day we got Pippin.

6. The last on my list is the Kong Squeezz ball.
This is a fun, easy to squeak ball. The squeaker is recessed and protected. The bounce is erratic. It’s made of a durable, non-toxic material.

We tied a paracord through ours for easy retrieval for the thrower. We have had our Kong Squeeze ball for about 10 months now.

All of the toys that have lasted have been inexpensive and worth every penny. They have lasted through needly puppy teeth and now her “big girl” teeth. If the last three toys have endured our tiny toy terror, they will probably last for yours too!

5 thoughts on “3 Toys You Should and​ Should Not Buy for Your Tiny Toy Terror!”